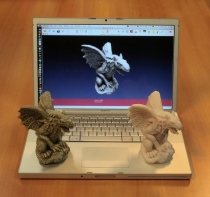 3D printing is a process of making three dimensional solid objects from a digital file. It is achieved using additive processes, where an object is created by laying down successive layers of material. Consumer-grade printers are used to create toys, tool parts, and jewelry, among other things.

3D printing, or additive manufacturing (AM), is used to make solid objects from 3D model data, usually layer upon layer, as opposed to subtractive manufacturing methodologies, such as traditional machining. The technology can be used anywhere throughout the product life cycle from pre-production (i.e. rapid prototyping) to full scale production (rapid manufacturing) and even for post-production customisation.

Consumer-oriented 3D printers are cheaper, smaller, slower, and are usually lower resolution than their industrial counterparts. 3D printing can be used for creating virtually any kinds of reasonably sized solid objects and even fairly complex machinery that is assembled from 3D printed parts. Consumer printers are still used for rapid prototyping, but also for entertainment purposes, e.g. printing models of virtual characters and play equipment such as dice. Notable companies providing 3D printed characters include FigurePrints and Makie Lab. 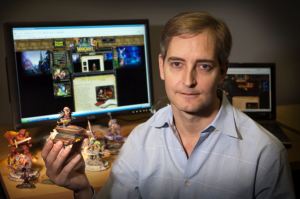 FigurePrints provides 3D printed models of World of Warcraft characters based on each player’s own avatar. After the user chooses the desired character and equipment, the 3D model is printed, polished, and mailed.

FigurePrints recreate digital WoW characters as fully detailed 3D replicas according to each player’s distinct avatar using rapid prototyping machines that convert three dimensional computer models into physical objects. FigurePrints is first directed to the right character and realm, after which the company takes a snapshot of the character as he/she appears on Blizzard’s Armory website. Players are then given the option of outfitting the character with any of the gear that he/she currently possess and to pose the character in any way they want. The character is then 3D printed as a statue or bust. During the final pass FigurePrints may tweak the angle and position of the weapons and armor to make a stronger and more aesthetically pleasing final statue. They may also need to add additional support elements to make sure that the print is stable given the chosen gear and/or pose. Finally, the model is mailed to the customer.