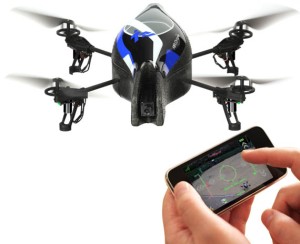 The Parrot AR.Drone is a radio controlled flying quadrotor helicopter built by the French company Parrot. The drone is designed to be controlled with iOS and Android devices. Through a built-in HD camera, the user can see and record whatever the Drone sees.

AR.Drone is made of plastic and foam and is about 30 cm long. It connects to an iOS or Android device using Wi-Fi to control its actions. The Drone has two cameras which can be viewed through the device’s screen. This HD video stream can also be recorded on a USB drive. In addition, the Drone has the ability to recognize 3D stages, is compatibility with augmented reality flying games, and has an ultrasound altimeter that lets it hover.