Amiibo is a line of RFID-equipped toys to be used with Nintendo’s Wii U and 3DS consoles. The toys can be scanned by supported Nintendo games and each toy typically yields some kind of special functionalities for the matching character in the game.

Amiibo toys – officially “amiibo”, with lower case – are equipped with RFID sensors placed in the base of the toy, and can be read by the NFC reader within the Wii U gamepad and New Nintendo 3DS. The toy line consists of popular Nintendo characters such as Mario, Link and Donkey Kong while also introducing lesser known characters such as Marth from the Fire Emblem series and King Dedede from the Kirby series. The toys are compatible with various Nintendo games and open different kinds of functionalities in each game. The latest Super Smash Bros games (Wii U, 3DS, 2014), for example, allow the user to level up corresponding in-game characters, teach them new abilities and save their progress in the figurines. In Hyrule Warriors (2014) a Link figurine can be used to unlock special items. In Mario Kart 8, figurines are used to unlock additional outfits for player’s Mii characters. Like Nintendo’s earlier RFID toys, the Pokémon Rumble U toy line, the Amiibo toys draw direct comparisons to similar “toys-to-life” games, such as Disney Infinity and Skylanders.

Pokémon Rumble U is an arena-fighting game for the Nintendo Wii U. While players collect Pokémon and fight waves of enemies, the gameplay can be enhanced by buying physical figurines which are able to enhance the game via the NFC reader in the Wii U controller.

A downloadable title from Nintendo eShop, the gameplay in Pokémon Rumble U consists of fighting waves of enemies using the Pokémon, while each stage ends with a larger boss battle. The art style presents the Pokémon as “toy versions” of themselves and all creatures from the five first generations of the main line of the series are available to collect. The gameplay can feature up to one hundred Pokémon and up to four players at the same time.

Accompanying the game is a toy line of Pokémon figurines (£3.99 apiece) that can be purchased in blind bags. Figurines include NFC chips and consequently are compatible with the Wii U gamepad that includes an NFC reader. By placing the Pokémon figurine on it players are able to upgrade the abilities of the corresponding character in the game and buy new skills for it.

R.O.B. (Robotic Operating Buddy) was an accessory for the Nintendo Entertainment System (NES). Receiving commands via the TV screen flashing signals through its eyes, R.O.B. supported only two games which involved R.O.B. moving around plastic discs.

Released in 1985, R.O.B. had a short product lifespan with support for only two games, Gyromite and Stack-Up (the “Robot Series”). R.O.B. was released in the US with the intention of portraying the NES as something novel – a “robot game system” – in order to differentiate it from the failed “video game systems” of the 1983 video game crash. It was available in a Deluxe Set, a configuration for the console that included, among other things, R.O.B. and Gyromite.

R.O.B. receives commands via optical flashes (there are six different types) in the screen. Just like the NES Zapper, R.O.B. only functions correctly when coupled with a CRT type television. A puzzle-platformer, Gyromite involves player collecting dynamite before the time runs out, with several red and blue pillars blocking his way. Player commands R.O.B. to place gyros on red and blue buttons (pushing the A or B button on the second NES controller), thus moving the pillar of the corresponding color. Stack-Up was sold with its own plastic blocks, and includes a series of mini games for R.O.B.

Boktai is a series of action RPG games for Game Boy Advance and Nintendo DS consoles. The game cartridges use a solar sensor to incorporate sunlight into the game. Depending on the amount of sunlight, places and events in the game are affected.

Boktai series (2003-2006), developed by Konami and produced by Hideo Kojima, consists of four games. The name Boktai comes from Japanese ‘Bokura no Taiyo’, meaning ‘Our Sun’. An attachment onto the game’s cartridge, a solar sensor, measures the amount of sunlight the game is played in. The sunlight is measured in blocks, with a maximum of eight blocks. Sunlight is a key factor to the gameplay of Boktai and necessary in order to progress. Via sunlight, the places, events, equipment etc. are significantly affected by different lighting conditions. In the first game, for example, the player character uses a solar gun that stores sunlight as its energy. This energy can be stored in solar stations which the player can withdraw and use when sunlight is not available. In order to charge the in-game weapon, the player must actually take their console outside in the daytime. Players also have the ability to store solar energy in solar bank to gain interest and pay debt. 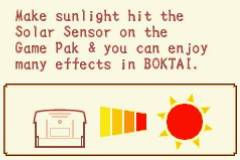 All but the third Boktai game have been released in the West. The fourth game was renamed Lunar Knights in the translation, and the familiar character names were changed. The game does not require a light sensor, either.

StreetPass is an “always on” background connectivity system for Nintendo 3DS. It allows 3DS to seek and connect to wireless network nodes on the background, for example when strolling through town, enabling data exchange for games and other features.

Nintendo 3DS features an “always on” background connectivity system, SpotPass, which can automatically seek and connect to wireless network nodes such as Wi-Fi hotspots, sending and downloading information in the background while in sleep mode or while playing a game. Further, using the console’s background connectivity, a Nintendo 3DS in StreetPass Mode can automatically discover other 3DS units within range, establish a connection, and exchange content for mutually played games, all transparently and without requiring any user input, even when the console is dormant. Thus a monster collecting game might reward users with additional monsters for passing somebody with a new monster.